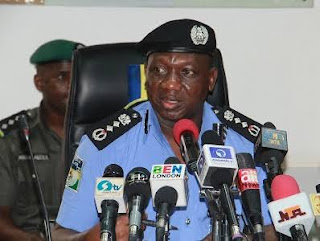 Nigerian police has debunked the allegations by Nigeria’s Senate president, Abubakar Bukola Saraki, that its men supervised an attack on his family house and his supporters after the ruling All Progressive Congress rally in Kwara state on Thursday.

“The Nigeria Police Force wishes to categorically state that all the allegations in the statement of the Senate President are incorrect, misleading and false,” police spokesman Jimoh Moshood said in a statement late on Friday.

“The Nigeria Police Force did not give any protection to any political thug or shield any APC thug to go to family quarters of the Senate President in Agbaji, Ilorin and vandalize houses, shops and inflict wounds with machete on three people as claimed by the Senate President.

Moshood said the police did not receive any complaint or report of “gunshot and wounding as claimed by the Senate President”.

Saraki, while addressing an emergency press conference at the PDP Presidential Campaign Office (Legacy House) in Abuja on Friday, alleged that the police showed an undisguised hostility to him and his supporters.

“Yesterday, (Thursday) after the APC concluded their campaigns in Ilorin, some of their supporters and thugs moved around town and in areas like Adewole/Adeta, Ile Otan and Ubandawaki/Pakata where they saw our people gathered holding their weekly ward meetings, they disrupted the meetings by shouting their party slogan and when our people responded by mentioning our own slogan, they fired gunshots into their midst.”

“They also inflicted machete cuts on some of them and two people suffered bullet wounds,” he added

The Senate president also alleged, that the “APC thugs shielded by policemen” went to his family quarters in Agbaji in Ilorin, and vandalised houses, shops and inflicted wounds with machete on three people.

“I believe the decision to attack people and properties in my family ancestral compound are a direct affront and attack on my person,” Saraki said.

But Moshood said Saraki deliberately peddled false information in his press statement and reiterated that the inspector-general of police had nothing to do with the Senate president being implicated by the suspects who allegedly carried out the now infamous Offa robbery attack in April 2018.

“It is incumbent on the Force to set the record straight and correct the wrong impressions that must have been created in the minds of the general Public and the International Community from the misinformation and misleading account from the Senate President,” Moshood added.