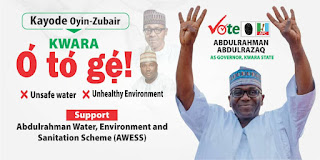 The Presidential Campaign Committee, Kwara State has sent a congratulatory message to its coordinator and APC gubernatorial candidate, Alhaji Abdulraham Abdulrazaq on the occasion of his birthday.

“February 5 is your day; like other years since the you gave yourself to the socio-economic and political emancipation of our dear state, today you are neck deep in Kwara project as the Aaron of our time”, Kayode Oyin-Zubair, Deputy Coordinator, Field Operations stated in a statement in Ilorin on Tuesday.

He described Abdulrahman as a game changer whose ingenuity has brought change to the modality of political campaign and votes canvassing in Kwara State.

“Undoubtedly, the ingenuity of Alhaji Abdulraham Abdulrazaq has changed the modality of our campaign in Kwara State. He has brought sophistry into votes canvassing by inter-phasing with an average voter either in the city or in the hinterland.

“This is a demonstration of his high mental capacity and intellectual endowment. As it is often said that no one does it in the usual way and expect a different result.

“As at today, he remains the only gubernatorial hopeful that has made public his policy document which has been applauded by many as rich and down earth.

“While still seeking to occupy the Kwara House on Ahmadu Bello way,  GRA Ilorin he has made several interventions in different areas of human endeavour. Abdulrahaman remains the largest contributor in real human development with his quarterly empowerment programme for market women where the least beneficiary takes home N100,000”.

Oyin-Zubair equally commended the first class entrepreneur for approving the take off of a program on water and sanitation.

According to him: “Despite the huge sum of naira committed by this government and its predecessor to water provision and reticulation in the state, water remains a scarce commodity and its lack has been responsible for outbreak of diseases and untold hardship on women and children.

“Abdulraham Abdulrasaq has approved an interventionist program on water. Since the symbol of our party is broom – we are concerned about the cleanliness of our environment. Kwara environment is annoyingly dirty! Is  cleanliness not next to Godliness again?

“Abdulrahman Water, Environment and Sanitation Scheme (AWESS) will be launched in the coming few days with a pilot and we shall ring the bell across the state,” he concluded.

He prayed God to grant the APC gubernatorial hopeful strength required at a time like and wisdom in the enormous task ahead of him.