The Campaign Organisation in a statement issued by its Director Media and Publicity, Abdulrasheed Akogun made available to journalist in ilorin on Saturday said Kwara state government under Governor Abdulfatah Ahmed deliberately slowed down the pace of work on the Diamond Underpass Bridge in order to use it as route to continuously divert public funds.

AACO bemoaned the snail pace of work at Geri Alimi, describing it as worrisome, stressing that hardship the project was causing road users and residents along that axis of the State capital can only be condoned by an uncompassionate government.

Despite the publicity stunts about smooth project funding through IF-K, the project which was promised to lapse in 18 months, with June 2018 as terminal date has been on for more than 24 months with no clear sign of completion before the expiration of this irresponsive and uncompassionate government.

”We are worried about the slow pace of work on Diamond Underpass bridge because it’s one of the IF-K funded projects. Governor Ahmed led administration is dragging the project unnecessarily as the state government claimed to have released adequate funds for the contractor.

”We believe the PDP administration in Kwara has turned the bridge to sure route to divert public fund. Recall that Governor Ahmed approved contract variation running into billions of naira in 2018 but its implementation remains unimpressive.

”We wonder what the PDP led government will tell kwarans again after failing to complete the project in June 2018 as published in a state government owned newspaper. Our organisation gathered Governor Ahmed and his party want to use the project to divert public funds after losing governorship election.

‘We therefore urge kwarans to be vigilante in order void this dubious agenda of PDP administration”.

The Abdulrahman Abdulrasaq Campaign Organisation also wish to alert good people of the state about systematic looting associated with IF-K funds management. We have uncovered fraud in IF-K financial statement for 2017 that was recently published after pressure from AACO.

”It will interest kwarans that the state government released N35million for construction of Post Office bridge in 2017, about 10 years after it’s completion by Dr Bukola Saraki administration. While N84million was released to invisible contractor handling Gas Akanbi-Agbabiaka road without doing any work on the road for two years as recent palliative work was done by KWARMA.

AACO understands PDP are desperate to cover their wrongdoings and mismanagement of public funds by signing pact with different organisations in order to get their votes but we appeal to electorates not to fall for their trap.

It is the height of an uncompassionate government to unnecessarily prolong and delay all ongoing projects in the State even with the much publicised so called successes of IFK. 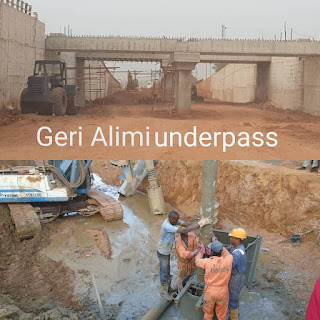