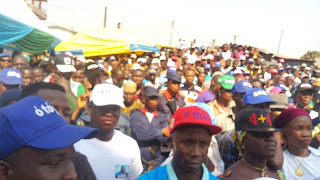 It is on record that counsel to Plaintiff proposed a negotiation move by writing a letter to the defendants on the authority of his Client: ASA INVESTMENT LTD.

The letter was consequently replied by the respondents’ counsel (office of AG). The date, venue and time (27th day of January, 2019, Governor’s office, at 3pm) were fixed in the reply to their letter calling for negotiations.

It was a show of disappointment when a letter sent from the plaintiff to the Defendants’ team knocked the door to the venue announcing the decline in the appearance of the plaintiff and his counsel.

The reason adduced was that the plaintiff’s counsel couldn’t access the plaintiff for directive since they left the court.

One begain to wonder if the two directors of plaintiff (ASA INVESTMENT LTD) could actually be reached. Time will tell after the 6th day of February as  suggested by the letter. Thank you all for following up the government properties. ..oye ki ole gbo abo