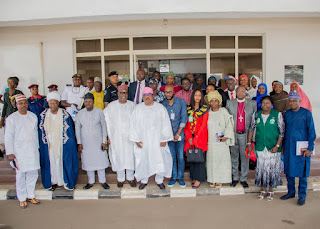 The Kwara State Government has reiterated its readiness to make the health sector fit for purpose.

The Deputy Governor, Mr Kayode Alabi, who is also the chairman of the Kwara State Taskforce on Immunization and Primary Health Care, stated this at the meeting of health sector Stakeholders held in his office.

The committee consist of the Chairman House Committee on Health and Environment, Hon Abdulrazaq Owolabi as the Chairman, Representative of the Kwara State First Lady, Commissioners of Health, Finance and Local Government and Chieftaincy Affairs, Executive Secretary of Kwara State Primary Health Care and the Emir of Shonga.

Earlier, The Kwara State Commissioner of Health, Dr Raji Razaq disclosed that Kwara State is now rated by the Federal Ministry of Healrh as one of the States demonstrating  political will in the health sector.

He traced the health sector achievements to the present administration’s passionate commitment to the people’s well-being.

The Executive Secretary, Kwara State Primary Health Care Development Agency, Dr (Mrs) Abimbola  Folohunsho gave the breakdown on results from the previous outreaches of the immunization team and was confident that Kwara will be ranked better following improvements in outreach.

Dr Mrs Folohunsho appreciated the Kwara State Government and also made some recommendations for the state to reach its full potential of Zero tolerance to Polio.