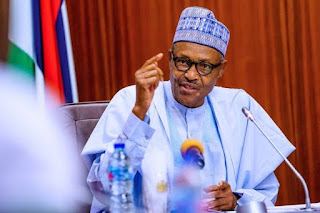 In a tribute to the late First Republic Minister, Parliamentarian, pioneer Commissioner of Finance, Kwara State and until his passing, Matawali of Ilorin and Tafidan Zazzau (Zaria), the President said he was highly saddened by news of the demise of the statesman and outstanding parliamentarian of his time.

According to President Buhari, “We will remember him as one of this country’s greatest legal minds and a national leader. He garnered respect that transcended our barriers visible and otherwise. His enormous contribution to the welfare of the people of his community, Kwara State and the country as a whole will serve to inspire future generations of our citizens.

“Whenever our Nation loses an elder in the class of Alhaji AbdulRazaq, it should serve as a moment of reflection on how the lives they lived and their sacrifices built the foundation of what we must continue to strengthen.

“On behalf of my family, the government and people of our nation, I extend our heartfelt sympathies and condolences to the Governor of Kwara – Alhaji Abdulrahaman AbdulRazaq and his family, His Highness, Emir Sulu Gambari of Ilorin, and the people of Kwara State.

“We pray for the eternal peace of his soul.”
Garba Shehu
Senior Special Assistant to the President
(Media & Publicity)
July 25, 2020