PRESS RELEASE BY THE

CHRISTIAN ASSOCIATION OF NIGERIA (CAN), KWARA STATE CHAPTER IN RESPONSE TO THE PRESS RELEASE  TITLED ‘IGNITING THE FIRE OF RELIGIOUS CRISIS’ 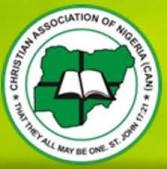 Our attention has been drawn to a social media circulation accusing the Christian Community of “Igniting the fire of religious crisis quenched in Kwara State years ago where it was alleged that the Bishop Smith Chaplain beat Imaam in Ilorin.

We wouldn’t have responded to this insightful, libellous and gross misinformation and misrepresentation of facts being peddled by the faceless writers.

This is because it is not the practise of the church to join issues with people of questionable character.

This write-up and allegation ought not to have attracted any response but for the fact of its magnified falsehood and malice against the Christian Community in Kwara State, especially the Anglican Communion who is the proprietor of the school in question Bishop Smith Memorial College.

We therefore make bold to say that the motive behind the write-up is not only dishonourable but also wicked. Any discerning mind who reads the sponsored publication and listens to the propaganda on the Sobi FM station would know that the aim of the writer and propagandist is not only to cause religious crisis, but also to distract and discredit the newly inaugurated government.

On the 21st June, 2019, we heard that the permanent secretary, Ministry of Education Mrs Garuba ordered that morning devotion that has been part and parcel of the school life should not be conducted again.

This is an aberration as far as the church is concerned. The Anglican Communion who is the proprietor of the said school went there to ascertain what actually transpired and we were met by a Director from the ministry of Education, in person of Mr. Ogunwole.

The students and teachers were also there; in fact, security and government officials were in attendance. A teacher who paraded himself as the Imam in the school was busy taking pictures of the Anglican Priests that were praying on the open field of the school when he was challenged while doing so; his phone was seized. Later the Anglican Bishop invited the Imam, handed over to him his phone, dialogued with him. They shook hands and embraced each other. The Imam even said, “Praise the Lord!”

For proper, and to straighten the account before this day, the permanent secretary had ordered that the principal of the college should buy fifty-two (52) ablution kettles and some praying mats which were allegedly stolen from the illegal structure constructed without permission from the ministry, the principal or the proprietor. We later learnt that after the departure of the Christian clerics and congregants, ministry officials and others, the Imam tore his clothe and alleged that he was beaten by the chaplain.

We will like to say here that the Bishop’s chaplain was not even in attendance that day.

The questions therefore are: at what point was the Imam’s clothe torn? Who were there when it was torn? Can the Imam himself himself swear by the Quran he believes in that his clothe was truly torn?

Furthermore, judging by the picture of the Anglican Priests praying on the school praying ground, does this depict violence? Do Muslim clerics not go to their mission schools to pray once in a while? When has it becomes an offence for proprietors to organize prayers on their school compound? Why is the permanent secretary, Ministry of Education coming up with the idea of cancellation of morning devotion and hindering it from standing as it has been from inception in Bishop Smith, Memorial College?

Why is it difficult to revert back to status-quo as agreed upon at the meetings we had in the principal’s office Bishop Smith Memorial College (senior secondary school section), Directorate of State Security Services (DSS) office and Commissioner of Police (CP) office.

Why should some disgruntled elements like mallam M. R. Bello a retired teacher come and incite and format trouble; he always claimed he visited the school for jumaat prayers, even though he comes along with several others.

Let me say this at this juncture, that it is not allowed in any muslim school for Christians to practice their faith even during devotion.

Why should the Christians be forced to allow other faith practiced in Christian schools.?

It should also be noted that since the time the State Government waded into this matter, and discussions are still on-going, muslims have been going on-air inciting other muslims against the Christians. This has happened in Sobi FM station and Harmony F.M.

On this note, we call on the government to use the macinery of government, putting all sentiments apart, to ensure equity, justice and fair-play. If this is not done, the Christian body (CAN) will not hesitate to consider taking a drastic action.