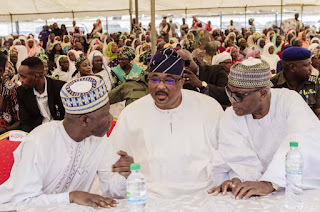 The well-attended special prayer session, organized by lovers and well-wishers of the Governor, was led by the Chief Imam of Ilorin, ably represented by Imam Imale of Ilorin, Shaykh Abdulhameed Abdullahi.

They also prayed for the Governor, his deputy, and cabinet members to record success in the assignment of taking Kwara State to the next level.

Mr Kayode Alabi was accompanied to the prayer by the Secretary to the state Government, Prof Mamman Saba Jubril, Chief of Staff to the Governor, Alhaji Adisa Logun and other top government functionaries.