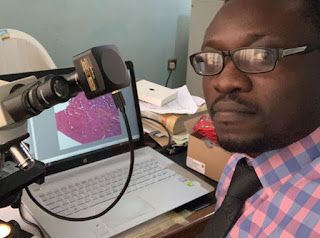 Dr Olaleke Folaranmi, a medical doctor with Medical microbiology background is a consultant pathologist with bias to Placental Pathology and Dermatopathology who goes by the twitter handle @DrGeeOne has won the award of #PathTweetAward Trainee Category for the best educational tweet in the year 2019. 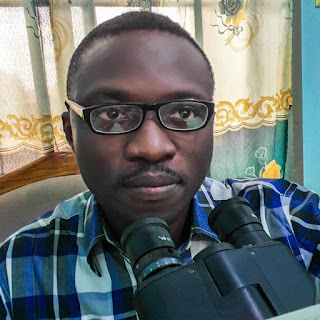 He was recognized for posting materials that has benefited many pathologists all over the world.

The award is a crowdfunded award created on Twitter by pathologists to recognize pathologists and pathology trainees who post exemplary educational tweets in the field of anatomic or clinical pathology.

The Award is organized by Prof. Sanjay Mukhopadhyay, Director of Pulmonary Pathology at Cleveland Clinic. He is the Associate Editor (Pulmonary) of AJCPJournal and author of lung pathology textbook.

Judges for #PathTweetAward are leading pathologists in the world who are active on Twitter. The judges vote and decide the top tweets, then throw it to the public (Pathologists) who vote the ranking.
He won the award for his post on #PlacentaPath on Aug. 29, 2019.

In his interview in The Pathologist, an international magazine on Pathology, Dr. Folaranmi explained that his presence on social media is borne out of the need to learn from specialists in well-developed countries  masters in their fields who can offer opinions on difficult cases and provide guidance”.

Definitely, his interactions have done more than that. The award is indeed well deserved.

Dr Olaleke Folaranmi  is a senior registrar in the department of Pathology of University on Ilorin Teaching Hospital (UITH).  He is from Asungbale in Ifelodun LGA of Kwara State.

He is a skilled guitarist and lover of Jazz music. He is married and blessed with kids.