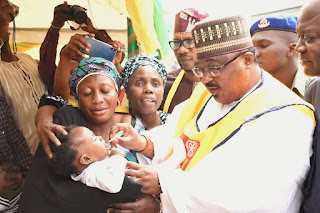 The Kwara State Governor mallam AbdulRaman AbdulRazaq Thursday flagged off the National Immunization Plus Days (NIPDs) in the state.

Represented by his Deputy, Mr Kayode Alabi, the Governor expressed delight over the government’s  eradication of poliovirus in the state, saying that tests conducted on both human and the  environment in the past five months were negative.

He  further assured of the government’s determination to meet standard requirements for quality campaign against polio as well as  strengthen immunisation delivery in the state.

Mr Alabi, who is also the Chairman State Task Force on Immunization, encouraged parents, caregivers, schools, religious and community leaders to make all under-five children available for the exercise which runs from Saturday, 15th of February to Tuesday, 18th February.

On his part, representative of the State Commissioner of health, Alhaji Ilyasu Tsado noted that immunisation is the most important public health intervention known to man and has prevented millions of diseases and death globally.

Earlier, Executive secretary Kwara State Primary Health Care Development Agency Doctor Abimbola Folorunsho thanked the Governor for the degree turnaround in the primary healthcare sector.
She emphasised the importance of routine immunisation to maintaining the state’s polio-free status and charged the government to sustain the effort.