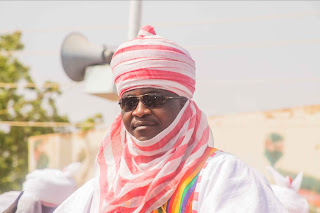 The Gobir Organization Foundation has set aside the sum of 250 million naira for disbursement to traders in Kwara State.

According to reports gathered, the ongoing disbursement of zero- collateral and interest-free loans to thousands of traders in Kwara, is projected to span throughout the 16 Local government areas of the State within an initial period of four years.

Speaking in Ilorin on Monday, the Organization’s Director of Strategy and Communications Mr. Charles Olufemi Folayan reiterated the commitment of the organization to taking a lead in championing renewed social rejuvenation and their dedication to investing in the economic output capacity of the State through targeted interventions in business development and other support programs for youth and women.

He remarked that the loan disbursement programme named “Gobir Funds” commenced in November 2019, is an improvement on the model of the Federal Government Social Investment Scheme of the popularly known as “Trader Moni”. The organization considers this as a critical means of empowering petty traders and helping to build the capacities of small scale business owners, especially those at the grassroot level.

He also revealed that apart from the loan, the organization has also taken the initiative to equip and train small scale business owners on the rudiments of business development. Beneficiaries of the project have been provided with the opportunity to recieve critical tranings in financial literacy, entrepreneurship, cooperative and Banking practices amongst other crucial trainings which are critical to business scale-up”

He asserted that the whole idea and strategic thrust of the initiative was predicated on the commitment and devotion of the founder of the organization Waziri Yakubu Gobir and his resolve to remain a key player in the drive to reduce the high level of poverty in the State.

He expressed satisfaction on the direct impact the program is making in the business of beneficiaries and the level of response and cooperation of the beneficiaries, especially with regards to their compliance with the repayment plan.

For us, the beneficiaries responses further lends credence to our determination to roll out more initiatives which are focused on bringing succour to the people of Kwara.