Why is Governor AbdulRazaq not sitting tight?
Kayode Oyin-Zubair 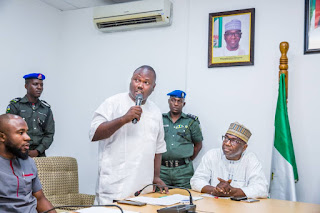 According to the zonal office, those funds were recovered from some suspected looters of Kwara Internal Service (KWIRS)  and officials of 16 local government areas of the State. The stolen funds totalling N5bn was shared ratio 70:30 according to EFCC.

As EFCC released over N200m today, the State has recovered about N380m looted funds through the effort of this anti-graft agency.

However, the most striking aspect of the brief but epocal event was the message of the Governor.

AbdulRazaq reminded himself and others that, we must be responsible in what we are doing because one day we would leave office and be made to account for our stewardship.

If the above motto is clearly engraved on the mind of public servants – surely, their disposition will be different. Many leaders are either sit-tight in office or sold to graft because of the comfort of a tenured-sojourn.

How best to bring out the servant with his eyes on the ball from Mallam AbdulRahman AbdulRazaq is to consistently engage him on issues of development, so that, our long years of deprivation can be recovered.

The Governor must keep focus and remember that he has a covenant with the good of Kwara State to bring succour to them. He must continue on the part of bringing  to the people basic amenities and do away with white elephant projects that serve no one.

The rural dwellers that constitute about 80% of the total population must continue enjoy a place of pride in the scheme of things.

The urban renewal scheme of his government is no doubt a cynosure to behold. It is baffling that since the creation of Kwara State and Ilorin as its capital,  only efforts of the founding fathers are still visible. Evidently, roads tarred in a couple of years ago have been washed away while Ibrahim Taiwo built many years ago needs only maintenance.

Lining Ilorin interior with interlock stones brings to mind the readiness not only to improve the aesthetics of the State capital but constructing a durable monument. The economic value is unimaginable with direct and indirect labour engaged so far.

The effort of Governor AbdulRazaq in clearing 40 years old dump sites in a number of locations within the State capital is another milestone that deserves commendation.  These among other life lifting schemes and projects are either completed or ongoing within Ilorin metropolis.

The rural communities have received a fair share of commonwealth too. Igbaja and Lafiagi water works that were rehabilitated alongside Ilorin water works in the early life of this administration is a perfect example. Even when saboteurs removed part of the newly installed materials at the Igbaja water works government moved in swiftly to effect replacement. Government cleared outstanding energy bills running into millions of naira and recently made arrangement for monthly vending through the Ministry of Energy. I found it worthy to provide the local vigilante with incentives to safeguard the water works. All things being equal, water will flow in Igbaja and other benefiting communities in a fortnight – Ministry of Water Resources has assured.

Esie Museum is not only a pride to Kwara but entire black race; it is a blessing that God deposited those images here. However, accessing the monument has been a great challenge over years. How can we thank the Governor that, the construction of its 3kms access road is ongoing.

It is incumbent on Kwarans to demand for good governance since the Governor is not a sit-tight one.

BREAKING: Hoodlums attacked Olohungbebe and his team in Asa