NCDC COMMENDS KWARA, TO SET UP TESTING CENTRE IN THE STATE

*NCDC COMMENDS KWARA, TO SET UP TESTING CENTRE IN THE STATE* 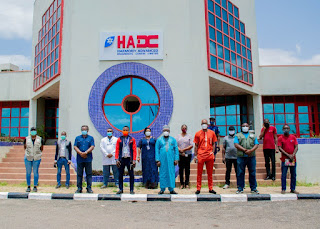 The National Center for Disease Control, NCDC has commended the Kwara State Government’s efforts in the fight against novel Coronavirus.

NCDC team leader, Dr Okoli Innocent gave the commendation when he led other members of the Center to Kwara to inspect laboratories in preparation for establishing of Molecular Testing Centre in the state to test for the virus.

Dr Okoli explained that the Director-General of the NCDC, Dr. Chikwe Ihekweazu who sent the team on inspection visit is appreciative of the AbdulRahman administration’s strides  in the health sector and has pledged the NCDC’s support to the state in the fight against COVID-19.

He added that he was not surprised that kwara state is ranked fourth in preparation for health emergency in the country, given the availability of state of the art medical equipment such as ten ventilators, six gene Xperts, ICU beds among many others in the state’s health facilities visited by the team.

Dr Okoli who is a Molecular Biology expert gave an assurance that as soon as the team’s final report on staff training and re-training, provision of more molecular diagnostic equipments, as well as reorganization of laboratories is concluded, the NCDC would swing into action to optimize and increase the state’s testing capacity.

Responding, the Chairman Covid 19 technical committee, Mr Kayode Alabi, who was represented by the Kwara state Commissioner for Health, Dr Raji Razaq appreciated the NCDC for the move to set of Molecular Testing Center in the state, he added that the priority of Mallam AbdulRahman AbdulRazaq is to reduce medical tourism both for diagnosis and treatment in the state.

Mr Alabi expressed optimism that Kwara would soon own a Molecula laboratory for COVID-19 testing, stressing that the state will no longer have to take samples to Ede in Osun state or Ibadan in Oyo state for testing.

The NCDC team had earlier donated 1000 pieces each of Viral Transport Medium, Swab sticks and Tongue depressors as well as 320 pieces of Falcon Tubes. The team also inspected the Public Health Laboratory, Harmony Diagnostic Centre and the former Sobi Specialist Hospital which has been turned to COVID-19 / Infectious  Disease Centre.

Modupe Joel
Chief Press Secretary to the Deputy Governor
May 21, 2020

We are leaving no child behind — Kwara Gov