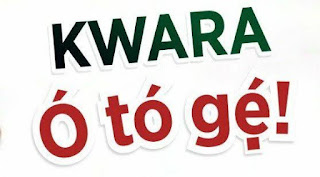 OTOGE: THE BATTLE FOR GOOD GOVERNANCE IN KWARA

Otoge is one of the biggest shocks Nigerians witnessed during the 2019 elections. Virtually  everyone within and without Kwara heard of it or try to know what “Otoge” – a Yoruba sentence-word roughly translating to “Enough is Enough”- means. Most people were stunned to see that the movement achieved its purpose without any record of loss of lives as against what many analysts predicted.
Truly, the motto of Kwara
being the State of Harmony is not misplaced.
Before I go ahead, permit me to make some important clarifications on Otoge. Unlike what many people think, it wasn’t a battle primarily against any single person, political party, dynasty, or family name. While it may be true that Otoge humbled some political ambitions or deflated some over-bloated political egos, the movement wasn’t particularly about ending or starting anyone’s political career(s). Like every revolution or movement, old orders may be faded away to usher in a new phase. What happened in the first quarter of 2019 in Kwara was primarily the battle to save the soul of Kwara from the shackles of corruption and kleptocracy, bad governance and institutional decay/stagnation, election rigging, and the climate of violence/terror.
Having seen what Otoge does not mean, let us now see what Otoge means. First, Otoge means gender and youth inclusion in governance. Gender and youth inclusion are some of the key indicators of the United Nations Sustainable Development Goals (UN-SDGs). While, with the exceptions of countries like Rwanda, Senegal, and Uganda are some of the African countries that have significantly achieved about 50 per cent women inclusion, data for sub-national level suggest that there is need to do more in this regard. As a subnational government, the Kwara State Government under her Governor, Mallam AbdulRahman AbdulRasaq – the biggest beneficiary, and the face of Otoge – achieved an overwhelming 56 per cent women and youth inclusion in governance – the highest at the subnational level in Africa.
Understanding Cabinet selection is crucial for success in governance. The Otoge administration meticulously selected some of the best young men and women that can bring development to a state that ranks low in virtually all scientific development indices. As against what many may think, Otoge was a well-planned political and development agenda.
Second, Otoge means socio-economic development. While 365 days may not be enough to overturn years of maladministration and stunted development stimulated by a regime of kleptocracy and merciless treasury looting in Kwara, there are good signs of socio-economic development picking up.
The past year has seen the state taking bold risks with massive investments in critical sectors: agriculture, health, education, sports, and tourism. The state’s investment in sugar production – a product which the state has a considerable comparative advantage – for instance clearly shows the lucid vision and mission of the Rahmoni administration.
Within the space of 365 days, the government has construction several feeder roads in Pategi – and other hitherto neglected parts of the state – with the aim of rural integration to boost agriculture. People of Kwara North may turn out to be the biggest beneficiaries of the socio-economic development that is ongoing in the state.
With the state’s attention fully on agriculture, the opening up of large farming communities of Kwara North – especially Kaiama, Baruten, and Pategi – becomes inevitable. At this rate, Kwara can provide the key to food security in West Africa and creating a series of employment opportunities through the value chain for her teeming youths shortly.
To improve socio-economic indices in the state, the government has launched several welfare packages under the Kwara State Social Investment Scheme (KWASSIP).
KWASSIP has started programmes like: “Owo Arugbo” – a financial transfer for the elderly; “Owo Isowo” – a micro-loan for small and media scale enterprises in the state; Digital Kwara – a manpower and capacity development initiative to help young Kwarans improve and own their digital skills and engagements; to name just but a few of them.
The third meaning of Otoge is simplified governance. While, for some, governance is rewarding political associates with “slots” in the Civil Service or inflation of contracts, the Rahmoni administration chooses to make things simple. In the fight against corruption, he simply weeded out “ghost workers” with Civil Servants’ verification.
This alone has saved the state millions of naira monthly. Also, all stolen or illegally acquired public assets have been taken back and returned to the state coffers where they truly belong.
Unlike in the past where things are done cosmetically and just for media attention, the new administration sees things differently. Rather than spending more on media frivolities, the governor allows his achievements to speak for him. Rather than spend so much erecting billboards for any project, the governor simply moves on to the next task, noiselessly. Rather than be distracted by his political foes, the governor keeps his eyes on the ball – losing the ball at a dangerous area is what the opposition wants. Like a good soldier, the governor avoids fighting in peacetime.
His opponents will have his attention during the next election, but it’s governance for now to the governor. The opposition is a full-time job for his petty foes, the governor knows the electorate elected him to be a full-time governor and solve their problems. So, engaging the opposition in needless battles is not what he was elected to do. He will give his foes his full attention when the times comes to face the electorate a few years from now.
In the final analysis, Otoge is a battle for the enthronement of good governance and not necessarily about party politics in Kwara. The last 365 days have proven to Kwarans that it is indeed possible to have good governance in the state. My sincere hope is that the current administration does not derail from the template it has self for itself. Above all, we need peace in the State of Harmony over politics.
Olalekan Waheed Adigun is a Doctoral Research Fellow at the University of Nigeria, Nsukka. He can be reached on
+2348136502040 or
email: adgorwell@gmail.com.
He tweets from @MrLekanAdigun