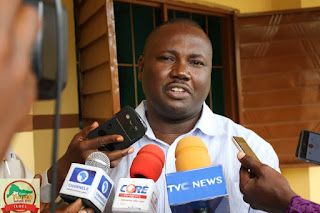 Mr. Stephen .A. Awoyale the leader of the association described the appointment as well deserved, timely and befitting. The appointment is a round peg in a round hole.
He described Mr. Kayode Oyin-Zubair as a grassroots mobilizer and lover of the masses, who is very intelligent and one with the right integrity, sagacity and experience for the job. He said he has no doubt that he will discharge his duties impactfully”.
Mr. Stephen further explained that, Mr. Kayode He is a selfless leader, always looking for avenues and platforms to first serve than to be served. To this effect, scores of youths have seen their lives transformed both academically, professionally and career wise through his unselfish committed passion to see them excel in life.
Currently, he’s the convener of Kwara Youth Summit, the single largest gathering of youths in Kwara State. The group cuts across all the major sectors in the state: Artisans, Professionals, Academics, marketers, etc. The group later metamorphosed into the Kwara Youth Center which has been adopted as an advisory body to the Kwara State governor.
He also, has the leadership skills and experiences needed in a time like this. He’s vibrant, eloquent and above all, a peace loving man.
The Youth leader, enjoined him to hit the ground running as the New Direction train is already on the fast lane; therefore, he is expected to join as quickly as possible.
On behalf of the good people of Youth Wing of CAN, Ilorin South Local Government, we expressed our profound gratitude to His Excellency, Alh. Abdulrahman Abdulrazaq for finding you worthy to serve the state and of course congratulate you ones again on your new status.
We pray that, God will grant you divine wisdom to needed to succeed
Signed: Stephen Awoyale Leader
Pastor ‘Remi Oyeniyi Secretary