Skip to content
A TRIBUTE TO CHIEF OLORUNNISOLA P.A.O. (SAN) AT 80 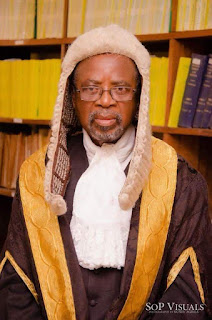 BY THE BOYS’ BRIGADE NIGERIA, KWARA STATE COUNCIL
+1-1+1-1+1… equal to 80 years of birth today, 7th June, 2020 for our dear father, brother, friend, mentor and servant-leader.
On behalf of the State President, other State Executive members, and the entire State Council, I join families and friends to congratulate an ideological silent achiever, our President Emeritus, Baba Pastor Chief Olorunisola P.A.O, a Senior Advocate of Nigeria (SAN) per excellence on his 80th birthday. Happy gracious Birthday to a creditable leader!
We in the Boys’ Brigade Nigeria, particularly Kwara State Council consider ourselves so blessed to have someone so uncommon like Pa Olorunnisola with us in the service of catching-them-young. Since knowing him over 50 years ago and obtaining his unconditional and unprecedented voluntary services among Boys and officers, we can surely and steadfastly testify that today’s celebration is not a mere celebration of 29,220 days of his journey around the sun but the festivity of the number of days the world has been enjoying his person and talents. We see him as a blue crayon, colouring our Sky.
His salvation, intelligence, love, honesty, diligence, equity, hard work, endurance, bluntness, accommodation… (I can go on) over the years are very much on display in his relationship with human race. With his uncommon longstanding zeal for, commitment to, knowledge about, and sacrifices for the B.B. Nigeria he has held tightly together the Kwara State Council of the Boys’ Brigade in thick and thin. So, he deserves nothing less than 80 cheers.
Baba is undoubtedly a patriarch in the Boys’ Brigade Nigeria and I think a day like this should be used to remind him of few of his remarkable exploit and a number of virtues we cherish about him.
History will continue to have it that Chief P. A. O. Olorunisola is the longest serving state executive official, who is serving the fiftieth (50th) uninterrupted years since the creation of the Kwara State Council of the Boys’ Brigade. Over the years, he has occupied and served meritoriously in the following capacities both at the State and the National Councils: The State Legal Adviser, 19th March, 1971— 2005 (34 years); The Chairman, National Constitution Review Committee 2000 – 2001; The National Legal Adviser 2001 – 2004 (3 years); The State Vice President, 2005 – 2008 (3 years); The State President, 2008 – 2014 (6 years); State Ex-Officio, 2014 – 2020 (6 years) (3years). Asked any objective BB member, “Why this unbroken years of long leadership and services?” The answer would simply be because of the above mentioned and other qualities the organization recognizes and covets in him. He is an embodiment of the BB twin pillars – Religion & Discipline.
In our observations, Chief Olorunnisola is:
Chief Olorunishola practically taught us that leadership can be used to develop human capital by raising followers with critical thinking to defend themselves and others around them for productive living. At a State Executive Council meeting, one of his contemporaries lamented on how a junior officer ‘rudely’ spoke at the entire State Executives members at the previous AGM and concluded that were it not for the presence of the State President (Chief Olorunnisola), he would have walked away from the AGM.
To our amazement, Chief looked at him intensely and said, ‘Why are we here if we don’t want the Boys to critically think and question what they don’t know. It is in their inquisitiveness and our sincere proactive response that they will learn and know the direction to follow.” That was the end of the discussion but many of us were humbled and had a rethink about our leadership approaches that day. This is just a fraction about the philosophy of the man we are celebrating today – words are not enough to describe this giant legal luminary by profession.
No doubt, Chief P. A. O. Olorunisola deserves honour, and indeed great compliments have been coming his way. The Boys’ Brigade cannot be left out in the many honour due to this _Primus inter pares_ ; BABA deserves more assignments fit for his age and a ceremonial parade with lots of SALUTE. That notwithstanding, man cannot fully pay for his worth to humanity. It is therefore no wonder his Creator is kindly honouring him with a peaceful and purposeful long living with many amazing accomplishments. Age may show on Baba’s face and body but not in his spirit even at 80 – a long healthy stay on earth like this is only a reward from God. Praise be to God for him!
At this point of his life, our desire is that God continues to give him strength and sane mind to take stock of his labour, be happy and give thanks to God in worship and enjoy the gift of God called life with his immediate and extended family members.
May Baba’s years be longer so that we can take more wisdom and directions from him.
Once again, a HAPPY BIRTHDAY to our dear grandfather, father, brother, friend, mentor and exemplary servant-leader at 80!
BEN. KAYODE S. O. ALAO (Capt; ANTO)
The State Secretary/Organizer