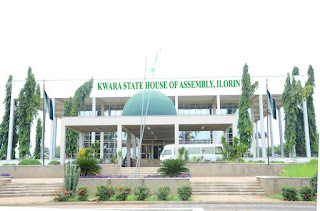 Kwara State House of Assembly has expressed concern about the quality of jobs executed by contractors handling major projects across the state.
The position of the State Legislature is the fallout of observations by the Honorable Members on the Day One of oversight tour  of projects executed by the state government.
The Speaker, Rt Hon. Engr Yakubu Danladi Salihu said the level of work done by some of the contractors did not commensorate with money paid to them.
At the Government High School Adeta, Ilorin, the lawmakers lamented that the renovation carried out was  below the  N330 million which the  contract was awarded.
Inspecting the solar panels project at  the School for Special Needs, Rt Hon  Salihu gave assurance that the house will look into why the contractor failed to execute the project despite receiving N22 million out of the total sum of N32 million.
Other projects inspected by the lawmakers included road projects at College of Education  ilorin, Kuntu-Adeta, Awolowo-Daudu, 500 KVA transformers installed at Adewole and behind  KWASU Contact Office,Zango Ilorin,  Kwara State Broadcasting corporation Apata Yakuba and Government Day Secondary School Agbabiaka Ilorin
Another team led by the Deputy Speaker, Hon Raphael Olanrewaju Adetiba inspected the renovation of Ajasse Ipo Comprehensive High School,  Government Technical College, Esie, Oro Grammar School, Victory College of Commerce, Edidi and Esie Museum Road In Irepodun Local Government Area.
Other projects  inspected were Oro Ago – Oyate road, Oro Ago Water Works, Igbaja Water Works, renovation of classrooms at Baptist Grammar  School, Igbaja In Ifelodun Local Government Area.
The Lawmakers summoned some contractors handling various government projects in the state and the Commissioner for Education, Hajia Fatima Ahmed,to appear before them Friday this week.
This is in respect of what the state legislature described as shoddy work on  the rehabilitation of some school projects across the state.
Hon Adetiba, however, expressed satisfaction with the quality of work on Esie Museum Township Road and Oro Grammar School .
He urged the contractors handling the various projects to always maintain quality to enable the projects stand the test of time.
End