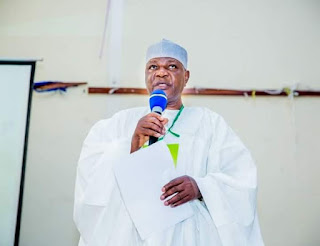 He liked to be called Aminu Adisa Logun. These are names he so much cherished and protected until his last breath on Tuesday July 7, 2020. If you must add anything to his name, it has to be the ‘mni’ acronym, which indicated his attendance of the prestigious National Institute for Policy and Strategic Studies (NIPSS) Kuru, Jos.
There are important takeaways from these two intangibles which anyone very close to the late technocrat could notice. He was a man who cared so much about substance than superficialities. By sticking only to your name and not necessarily some acquired titles, the message is that you like to be yourself. He was a man who was always true to himself and his beliefs. It is safe to say I share this belief with the late chief of staff since he was a dear uncle to me.
An alumnus of the great Barewa College and a polyglot, the late Chief of Staff was a fervent admirer of the late Sardauna of Sokoto Ahmadu Bello. Even so, he was a true Nigerian who despised prejudices built around ethno-religious sentiments. For him, all that matters are your competence, sincerity of purpose, team spirit, and hard work — not your tongue or ethnicity.
Having such a personality as my Chief of Staff was an honour and a stabilising factor. He brought his age, experience, and global exposure as an industrialist and intellectual to bear in advising the relatively younger members of the Otoge cabinet. My other appointees found in him a father figure who they were certain would scold or encourage them in equal measure, knowing very well that he was far ahead in everything they needed to excel.
When this administration came on board on May 29, 2019, the Chief of Staff’s chairmanship of our Transition Committee was a huge blessing. He not only shared my passion for a new and working Kwara, he had a fantastic grasp of what the issues were, including the land mines, and he gave me his unwavering support. He was the right bulwark that the Chief of Staff should be.
The COVID-19 pandemic is definitely one of the most unsettling developments in human history. It has totally changed our lives, including the way government business is run and how we relate with one another. On April 6 , 2020 when I came out of self-quarantine that followed my feared contact with infected persons, we resolved to take the lead in physical distancing as a subnational government. This was communicated to everyone. As a man who lived ahead of his time in terms of his firm control of modern ICT gadgets, the Chief of Staff was one of my officials who easily embraced the new trend despite his vital role in the administration. We chatted daily on phone or met often via the zoom platform to ensure that governance continued seamlessly. Like me, he perfectly understood that physical distance at this time was particularly vital for persons of our age bracket. He was 74 (born 20th May, 1946) and I am 60. That made us quite vulnerable and imposed on us the responsibility to lead by example for both the government and the governed.
Like James A Baker lll, the world gold standard of Chiefs of Staff, Aminu Logun focused more on “Staff “ than “Chief”, hence the immense impact he had on governance.
Except for age that eventually makes us all vulnerable, there was nothing in the carriage or behaviour of the late Chief of Staff that betrayed poor health as he was very active up to his last moments. He kept strictly to all the pandemic protection protocols, always wore his face mask, and kept a reasonable distance from others. That he nevertheless succumbed to complications from the virus is a further evidence of the insidious nature of this virus. His death is indeed painful and we seek solace in the Holy Quran’s injunction: “Inna liLlaahi wa Inna ilaehi Raajiun” (From Allah we came and to Him is our ultimate return).
Adieu, Aminu Adisa Logun. Your frank advice, your firm and articulate positions on issues of governance, your undiluted loyalty, and your patriotism to see a better Kwara State shall be sorely missed. I pray your family find the fortitude to bear this sad loss. I pray Almighty Allah to forgive your trespasses and admit you into Aljannah Firdaus. Good night, my dear Uncle.
AbdulRahman AbdulRazaq is the
Governor of Kwara State
July 11, 2020.