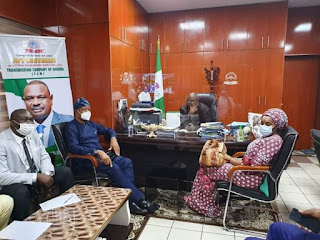 Nigeria (TCN) in a bid to sue for improved power generation for Kwara State.

Hon. Aisha Ahman Pategi,  while speaking with the Managing Director of TCN, Engr. Sule Ahmed Abdulaziz, reiterated the commitment of H.E Governor AbdulRahman AbdulRazaq in providing electricity to every nook and cranny of the state which will bring about transformation of the state into an economic and commercial hub.
The commissioner, in her statement, described electricity as vital for economic transformation of any community.
“Electricity is vital for the growth of big businesses and SMEs, which the Kwara State Governor is giving a chance to thrive well in the state” she said.
She further advocated for the expansion and upgrade of transmission facilities in the state for efficient and effective wheeling of generated electricity.
She also urged the agency to fast-track the completion of 2x60MVA 132/33kV substation at Shonga with 2x132KV line bays extension at Ganmo which is still at 18% completion and the 2x60MVA 132/33KV substation at Egbe and 2x132KV line bays extension at Omu-aran which is at 85% completion.
In his response, Engr. Sule Ahmed Abdulaziz promised more collaborations with Kwara State Government under the leadership of H.E AbdulRahman AbdulRazaq, especially at this time when Kwara State is gradually getting back on the map of advanced states in Nigeria.
Hon. Aisha Ahman Pategi also assured the agency of H.E Governor AbdulRahman AbdulRazaq’s highest esteem.
Signed:
Mrs Taiwo Olushola Abosede,
Press Secretary, Ministry of Special Duties.
14th July, 2020
Ends